Ban Message (Gyazo/imgur or copy and paste): Banned from Roles: command, Captain, Head of Personnel, Chief Engineer, Quartermaster, Chief Medical Officer, Research Director, Head of Security permanently - Command 1.1- Command must be competent As HoS, gave the AI antimov laws despite having no need to change the laws at all. Round 24206
State your appeal: So, AI had a lawset that made it not have to listen to anyone, and it wouldn’t listen to me. So I thought it would be a good idea to give it laws that make it listen to humans, so I went in with the captains spare ID that I spawned with and looked for good laws and thought I saw Asimov. Now I do not know how to spell it exactly so I thought it was Asimov but it was antimov. This was all a accident and misunderstanding. (And I was also banned from all antags for some reason) I also told the admin all this information and they disregarded all of it. It was all a accident, I am very tired, one of my pets died today and I got almost all sleep. I have also been grinding HoS for 17 hours and I was so close to getting captian. Please consider this appeal.

This is my ban so I won’t be handling it, but I would like to point out that the law change occurred after an RD and captain joined the round, and the captain had already changed the AI’s laws, so spawning as acting captain is not relevant since the ID should have been turned in already anyway. 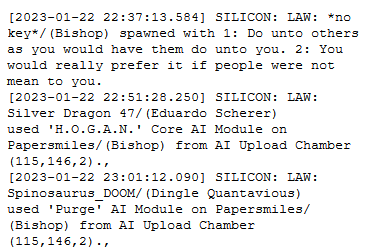 Some things from this. I did not know that the laws were changed to that from cap/RD. 2, I already changed the laws before I saw cap OR RD. I was unaware of all this information.

I was unaware of all this information.

There is a huge station-wide announcement when a new captain joins. If you missed it, that is entirely your problem.

The first announcement I saw was some blockage in vents

Failing to communicate and coordinate with other members of Command, doing another Command member’s job and doing it this badly is a fair reason to get Command 1.1 banned.