They constantly ick ock/ock ick during rounds, and their argument for why is saying that ‘ick ock should be allowed anyways’, backed by the argument they had in criticisms about how they think the rule should go. They obviously believe so, because they act like it doesn’t exist. Here’s a few examples;

Most recent one, round ID above
I was murdering the golems with an actual IC reason (which I can explain more if needed), they decided to ock ick this to me; 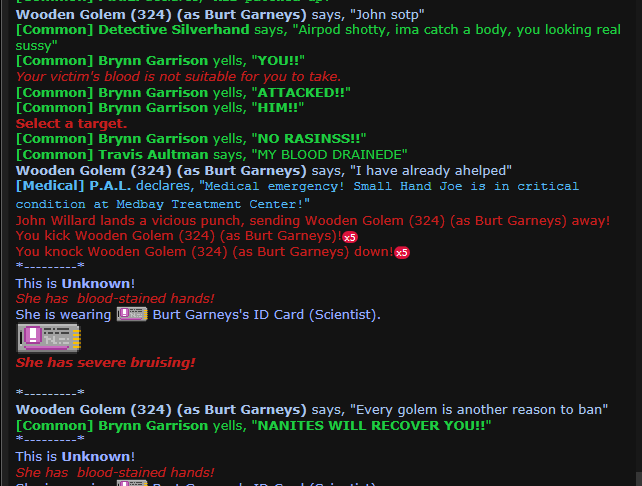 After this interaction, I walked into xenobio and noticed a new golem of the same type. While I am not sure it is him, it sounds just like them;

Additionally, once the round ended, they declared this;

I do not have Round IDs for everything below

And here’s other examples of their ick ock/ock ick;

And other than that, they’ve also been going against laws as Silicon;
As an Asimov Engineering cyborg, opened the Vault to everyone when no one law 2’d them to do so

My only regret when making this grief patrol was not keeping track of this sooner, because otherwise I’d have MANY more examples to give.

More in-depth explanation of what went on in Round 14531:

As I was trying to vassalize my last target (3 cargo vassals, I was vassalizing a Shaft Miner)
A golem witnessed and called me out. They then proceeded to try to knock me down by baseball batting a genetics body into me to get the chainstun death on me;

This is the screenshot I had and my chat logs are gone to get the message of them trying to chainstun me, but I did get this screenshot to prove they had the baseball bat;

Enrico Pucci and Jack, my vassals, arrive at Genetics, and I explain to them that the Golems are trying to validhunt me. Together, we killed the validhunting Golems that were trying to attack us in Genetics/Nanite lab, but left the others alone.

Later, I see a Golem with Burt’s ID in genetics. I assumed that Burt was the one making the golems, and since we both like to mess around and attack eachother, I punched (using brawn) the golem wearing his ID. This turned out to be Phoenix, who then proceeded to make more golems to attack me.
A while later, after I did bloodsucker stuff, I came back to xenobio to once again yell at Burt that I hated Golems. This time, I was surprised by this;

This is clear intention to validhunt me, so knowing this, I retaliate. We fight, I end up being put to orange/red health (uranium golems deal burn damage and its a damn pain), and see Burt again. Expecting Burt to be behind it all (Made obvious by him commanding the golems to kill me in the screenshot above), I kill him to stop the validhunting.
While I kill him, he ock icks this to me;

I then move onto Xenobiology to clear out the rest of the Golems, who I know have the order to kill me. This is when I heard a golem I’ve never seen before, but of the same type as Pheonix, say this;

At the end of it all, as is in the grief patrol, they had this to tell me;

I don’t have to much to add since I kept to main hallways, I was Golem 899 Master “Travis Aultman” only orders “Kill vines” “Honor and glory.” so I just helped people around station and then came looking for travis and held up in xenobio, captain and RD came in saying golems attack gene and RD, I don’t know who did that.

Silver golem spawned in a shell saying, so for certain 328 was fox.

I meant to say. “But can’t meta john with golems shells.” But you showed up and interrupted us. So i just keyed enter and tried booking it for door.