How long have you played on Fulpstation? Maybe a year at most. I forget exactly when I began. 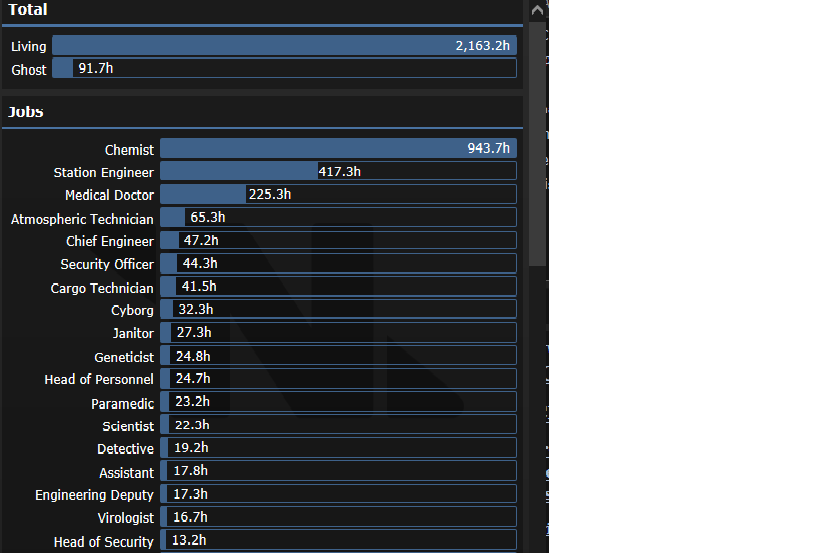 Medical: I know there are a decent amount of med mains in the mentor group but… Anything in Medical. I have like 1200 hours in medical. I helped write the current purity guide for chemistry with Blaberface. I can walk anyone through anything in medical at any given point if they ask me. I intend to write a guide for chem factories but still haven’t gotten around to it as I’ve been interested in Engineering.

Functionally anything in Engineering that isn’t super advanced atmos manipulation. I’ve been maining CE as of late. Anything to do with setting up station goals, rebuilding those dastardly syndicate explosions, building fun toys/rooms for crew, settings/building solars, the SM (and fancy SMs), redoing atmos layouts, and HFR. I feel extremely comfortable with Engineering as a whole now.

Supply: I don’t have a ton of hours in supply but I can do anything in it. QM and Cargo are usually my “I just wanna mess around a bit and maints crawl/shove boxes” thing. I personally don’t enjoy mining and have largely avoided it but I can easily walk someone through becoming a proficient miner.

Service: The only things in service I would say I’m not good at are both Botany and Kitchen. I simply haven’t spent any time doing or learning them past the basics. Other than that, I do enjoy jani/clown romp about the station. I would feel entirely comfortable coaching people through these jobs as they largely rely on base mechanics and RP.

Science: I felt this was one of my weaker areas so I went out of my way to learn Xeno fairly recently. I know genetics well. I’ve actually never done toxins but I have enough atmos experience to at least be able to figure it out. I know nothing of circuits and I’ve never really tried Robotics.

Command and Security: I’ve largely avoided both command and security for a long time because I’m not a particularly robust player due to using a trackpad.

But I have begun maining CE because I greatly enjoy engineering and wanted to both get more time in command in general as well as be able to do larger projects in engineering without directly relying on anyone else in the department. I also have a somewhat decent amount of experience with filling in as acting captain on lower pop hours as HoP/CE.

I do know space law fairly well but only because I always reference it when having to do anything regarding sentencing. I also go out of my way to give the benefit of the doubt and/or the lighter of two options simply because I feel it gives more opportunities to both sides to have a more exciting shift. A perma break out is a lot more fun for everyone than sitting bored in brig with 3 corpses in brig morgue.

All in all I think I have a wealth of information that I would like to share with new players and help fill in gaps in coverage or knowledge with other mentors. Plus I’m sure there’s a good deal I can learn from other mentors, too.

It’s a beginner friendly server and I enjoy teaching people new things. I honestly feel that in the past few months Fulp has been pretty steady thanks to all of the staff. I see a lot of new people end up staying and really enjoying all the random things you can do with the game. And I also see problem players being dealt with frequently which really helps foster a nice station to teach people on. I like doing and teaching stupid projects like having a rage cage or building an conveyor belt driven execution-by-vending machine squisher or making a plasma room to dance around in and laugh at stinky oxygen breathers. Overall it’s just a fun balance of new players, old players and insane-o mode mechanics to mess with during the chaos of dynamic rounds.

+1 for obvious reasons
Good chemist, funny, great to see every round, actually does his job saving the SM instead of dicking around!

Only had good interactions with him & big pool of knowledge.
+1

+1 Got crushed by my cat crusher once.

wears a wig on their plasma helmet -1. Everything else +2

Honestly, I thought Screw was already on staff. +1 to make all my delusions about Screw true.

We have concerns about your previous behavior on the server and discord, so we are not comfortable with considering this app for now.