What happened:
Sarcastron the service borg comes into the kitchen early in the round while I’m playing cook with Pucci. The borg says nothing when I ask him to leave multiple times, and instead just floats around the kitchen. I start to attack it with my knife because it won’t listen to verbal commands, and eventually it flashes me before leaving the kitchen.

a few minutes later, the borg comes back fully repaired and does the exact same thing. Just standing in the kitchen, and not leaving when the cooks ask it to leave. I start hitting it with my kitchen knife again, it fights back with a zippo lighter until all of its modules are disabled, and then tries to leave the kitchen. The borg has already done this once so as it rounds the corner I reel it back into the kitchen with a meat hook from my uplink, and finish it off. Anna May saw this last part happen, and shorty after I killed the cyborg, josephjomama admin PMed me about why I killed the borg, and I end up getting a note for it.

Maybe 35 minutes later, a heretic Ashman gives Pucci a weeping avulsion before trying to break down the kitchen door, then I meat hook it into the kitchen and north star glove CQC it to death.
not too long afterwards, a Plasteel Golem (598) climbs over the kitchen counter, walks directly towards me, and starts hitting me with a crowbar (before also being CQCed to death) 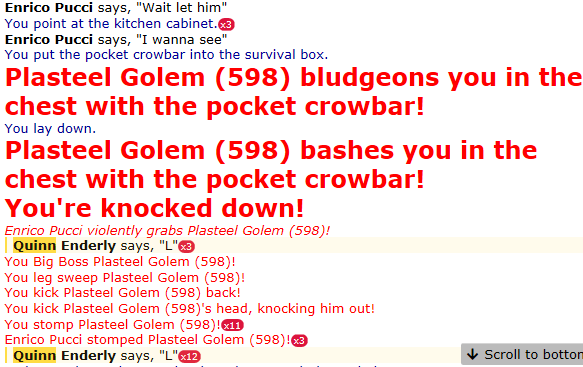 I’m not certain that the golem was the same guy, but it seems pretty likely.
I was a traitor, and the cyborg was on reporter.

Been dealt with, thanks!