Active hours:
Usually active either in the morning or late in the evening. If my sleep schedule isn’t shattered that is, otherwise I may be on for whole day, or only for one round for the whole day.

Are you interested in becoming a mod?:
To be perfectly honest, not really? I could change my mind if I get to know the nuances of the community more and when I get to be 150% sure I understand the rules perfectly and didn’t misunderstand something. 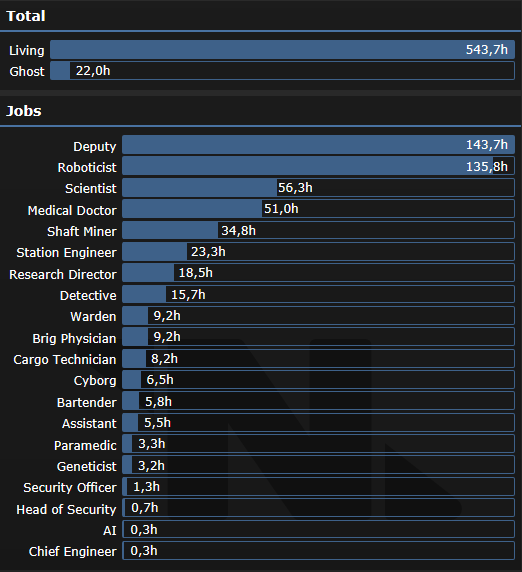 Science:
Roboticist - I have a ton of playtime on this role and know nuances of the role, how to be efficient at that role, what is good or bad in certain situations, how to maintain, upgrade and repair borgs alongside the nuances between them and AI (and by extension how to slave Syndicate Cyborgs to station’s AI and station’s lawsets) alongside being able to perform all sorts of surgeries needed in quick succession or all at once all while knowing what Robotics can do to help the station (via building various kinds of bots for whatever’s needed from medibots to floorbots) or science by helping with materials experiments for Experisci.
Scientist - I’m still green at Toxins and completely new to Circuits, but Xenobio, Nanites and Experisci are something I’m keen on. I mostly remember the slime breeding tree, crossbreed charts and how to be effective at it while still helping rest of Science with surveys and other slime related stuff alongside knowing how to attempt to breed specific slime types needed for something/someone (RNG is still something to keep in mind when doing Xenobio). In regards to Nanites I mostly know how to work with them, how and where to construct nanite chambers, what programs are good and which ones can get you and others into trouble and generally how to not completely ruin them. Experisci I mostly know how it just works and what the experiments ask of the player to do, how to use the scanner, and how to get what’s needed for the experiments. meanwhile Cytology I only really know how to not cause a threat to yourself and everyone else in the department and it’s vicinity, similiar situation with Toxins, I’m not really good at performing well at it, but I learnt (from manny mistakes) how to work more safely in Toxins and what you shouldn’t do.
Geneticist - I may not have much playtime into that role itself, but I sure know the strategies for faster and easier discovery of mutations, how to help someone with terrible / deadly mutations / too many mutations, how to not handle Hulk mutation and how to construct public DNA Consoles with mutations needed for the situation the station is in.

Medical:
Medical Doctor - I have most surgeries memorized alongside how to perform each of them faster, what tools are crucial to have, patient priorities, how to handle husks, what to do with decapitated heads or gibbed bodies, how to handle blood issues with patients, how to keep the workplace clean of blood and how to remodel the medical bay to be more efficient or stylish, or both, only things I really don’t know is chemistry.
Paramedic - I have few hours on the role, but mostly got the gist of how it works, why you shouldn’t just be a doctor with All Access, how to use access for the job instead of anything else, how to handle spaced / lavaland bodies and how to get as many bodies at once as possible in one go to medical and how to prevent bodies from rotting.

Security:
Deputy - I have most playtime in this job. I mostly know how to not do a Security Officer’s and your department’s staff job but your own of being a guard, the Standard Procedure in arresting people in the department I got, how to help a department without going out of the frame of Deputy’s work, what is and what is not normal for each department. I also know how to handle lack of ranged solutions for arresting people and mostly how the block chance works. I also know how to use each department’s deputies’ specialties to an advantage and how to handle Hulks that get out of control as Science Deputy.
Detective - I have a general idea of how the role works, what are it’s nuances, most of it’s gimmicks, how to do detective’s job and not just officer’s with better baton and a revolver, how to handle suspicious activities, what your position is in relation to rest of security, why you shouldn’t arrest people yourself, most forms of interrogations and when to use the each element of the equipment a detective recieves and what can help in detective’s work.
Warden - I have a general idea of how handle emergencies, when to open up armoury and when to hand out what equipment to who and why, how to handle normal prisoners, mostly how to handle permament incarceration prisoners and their rioting. I mostly memorised both Fulp’s version of Space Law and /TG/'s version of Space Law alongside most modificators to timers and how much time can someone be brigged in for what crimes and how to handle suspects and when to release them and why, how to handle most antagonists that get caught and how to handle revolutions, cultists and xenomorph threats.
Brig Physician - Pretty much same thing as Medical Doctor, but as Brig Doctor I also know how to construct a medical area from scratch alongside knowing what priorities a brig physician has and should have, how to handle surgeries and revival on the go during emergencies and what their place is in Security.

Supply:
Shaft Miner - I know how to mine as effectivly as possible with what you can get, how to not handle Fauna problems, how to not lure Megafauna to the Mining base, how to handle Gibtonite, how to use Tendrils to their best for other miners, Cargo and rest of the station as well, what should be brought to Science and what to Security, generally how to survive down on Lavaland.
Cargo Technician - I know how to handle the Supply Shuttle, what most crates contain, how to obtain less legal crates, how to handle bounties and bounty cubes (and what to not do with bounty cubes), what to do with mail, where and how to deliver what’s needed / requested, how packaging works, how to sell anything not bolted down for profit and what should be the order priorities in specific emergencies like Cult, Revolution, Xenomorphs.

Command:
Research Director - I have a general idea of the research priorities, how to handle sillicon issues, how to work with AI lawsets and how the lawsets work in general, how to construct AI Cores and when it’s fine to construct them, how you can prevent a Hulk Tide / Golem Tide / Sentient Mob Tide / Mech Tide for as long as possible and how to properly handle creators of these Tides.
Head of Personnel - I may not have any playtime as head of Personnel, but from rounds where I got promoted to Head of Personnel I know how to handle the new ID Trimming, how to handle accounts, how to handle job slots, how to love and care for station’s mascot Ian, how to manage access for Heads of Staff and Acting Heads of Staff, mostly what access each job requires at their basics and what additional access can help which jobs, how to handle Cargo and their wacky ideas / projects and when to step in.

Engineering:
Station Engineer - I may not be able to properly set-up a Supermatter engine, but I have a general idea of how and why to not tamper with it without any idea how to properly set it up. I also know how to set-up Solars from scratch, know how to handle breaches (and how to create and use them as antagonists) on both normal maps and maps like Icebox, nuances of Construction (and how to use it for more malicious intents as antagonist roles) and what tools are needed for what and why, how to build all 3 of the possible station objectives, how to not build Bluespace Artillery, how to repair doors and the door’s wiring and it’s access issues (and by extension how to hack your way through doors), somewhat how to work with disposals and piping outside of atmospherics, how to handle RCD and RPD, why you shouldn’t hog the radiation suits and hardsuits outside of needing them for working with something or on something and how to handle radiation problems, and how to not turn rest of the station into Chernobyl 2.0

Service:
Bartender - I have memorised most basic mixes, how to handle the customer bots, how the machines you get work, where to get ingredients for more exotic mixes, most ways of handling barfights alongside what improvised weaponry you can get as bartender when in need and what is effective in certain situations (like molotov coctails during romerol outbreak).

What are some things you’ve noticed as a player on Fulp?
I noticed a significant contrast between playing on Fulp versus playing on /TG/ servers, mostly in players and how most are decent and nice people that tend to help new players, instead of making their lives hell and discouraging them from playing the game with toxicity.

While I don’t doubt that you have the knowledge to teach new players, I have a gripe in that you complain and criticise in the discord quite a lot. This spans from normal complaints about antags or singling out players in the criticisms channel. It would be incredibly discouraging for a new player if mentors or other staff of the server, were targeting them and complaining about their mistakes.

I’d just like to see (pseudo) staff be more positive about mistakes, which can easily be rectified.

TL;DR Stop complaining as much lol

Yeahhhh I do have a problem with that. I really need to cut on using the #criticism channel and instead do something else and play something else from time to time.

No doubt will be a good mentor on fulp station +1

Same hang up as above, less #criticisms and I’ll be a +1/

I like that you’re a skilled, experienced player and I’d be happy to have you as a mentor, but I can’t endorse this until you relax (read: stop posting entirely) in criticisms. We want our mentors to be examples for the server, and the constant negativity isn’t that.

For now, this is a no. Though you are a good player, the #criticisms posting and a somewhat recent ban for blatant IC OOC are concerning. In a month if you’re still interested and feel like you’ve addressed those concerns, feel free to apply again.