How long have you played on Fulpstation?
I got interested in SS13 around Spring of 2018, and only really played on Fulp specifically since I started. I’ve played on-and-off between 2018 and 2020, but I started playing much more frequently in 2021 had around 150-200 hours in January and now have around 600 hours server living-time. 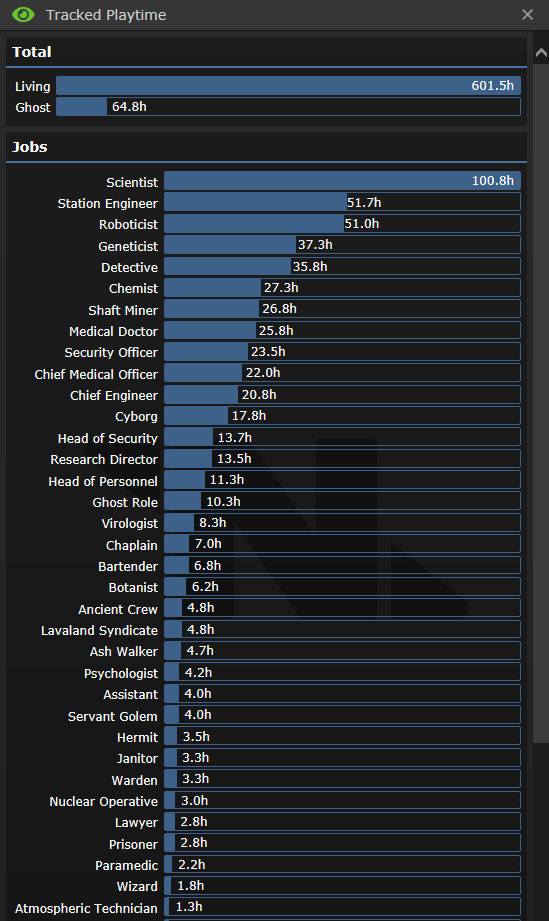 What departments are you able to be a mentor for? Can you elaborate on your experience in those departments?
I know Sci, Engi, and Med very well, and I have a good amount of experience as sec and shaft miner, and a bit of experience as most other roles (though I know almost nothing of cargo tech and QM, and have never once played as cap). For science, I know almost everything about Robotics, Xeno, and research nodes as RD- and I have obsessively learned everything about Toxins the past month and a half (~15.5 minute round-time research bomb PB). In Engineering- I know everything up to how to make a tesla from the SM, though I still sometimes run into issues in setting up a BSA (also I haven’t done much atmos tech though I know how pipes work from Toxins). I have enough knowledge and decent enough navigation of the wiki to perform most of Med’s functions as decently and quickly as could be expected, though surgery isn’t really that hard in most cases. Only thing I’m lacking in med is chemistry’s industrial chem manufacturing but Screw’s online often enough that it doesn’t really matter. Sec and Shaft Miner aren’t too complicated as far as I’m concerned- as Sec I pull up Space Law wiki and adhere to that as best I can and shaft miner is just a matter of collecting resources and knowing the fauna.

What are some things you’ve noticed as a player on Fulp?
To be honest, I can’t much differentiate Fulp Station from other servers as I haven’t really played much of other servers- I’ve only really ever known Fulp. If I were to interpret the question more generally as how I’ve noticed the activity of those on the station, I would say that in the past year I’ve gotten a lot of enjoyment out of my interactions with and getting to know the regulars of the server. The admins/moderators have done a pretty good job of mitigating griefers since the medium RP update, so it hasn’t been as chaotic recently as I’ve noticed in the past.

Additional Notes:
I posted a mentor app about a year ago, when I had around 100 hours playtime. I pretty much immediately deleted it because I looked at other mentor applications at the time and thought 100 hours was insufficient.
As a gesture towards transparency- I have a history of admin remarks regarding potentially grief-like behavior- I’ll admit to a few of them being me pushing the limit of what would be RP-acceptable but most of these were accidental cases of me inadvertently causing harm to the crew (and there were a couple instances that were legitimately grief before I had a good grasp of self-antag behavior early on in playing the game).

While we don’t expect mentors to have a perfectly clean track record, you have at least 5 non-trivial admin remarks since September 1st. We expect players to have a firm grasp of the server rules before accepting them as mentors, so we won’t be able to accept your app at this time. You’ll be allowed to re-apply in a month, but I’d recommend waiting until it’s been a few months since you’ve had incidents with admins.