Ban Message (Gyazo/imgur or copy and paste):
Round 16682 - As an AI with subverted laws to kill two people and follow the orders of your master, you prioritized killing as many crew as possible and keeping yourself alive by flooding the whole station with hot air. Please be sure to more closely follow your laws as silicon.

This is not what happened, my laws were purged, and I mentioned that to the CE before my new laws were uploaded. so the CE knew something was up. I put plasma into atmos so that I could kill those two people, because I don’t know any other way to do it. I then tried to kill those two, and, before i could finish, I got attacked, so I switched to defending myself, since I cant kill those two if I’m dead. I then got carded, all the while plasma was still in the distro. I did not prioritize killing as many people as possible, I tried to kill the two that I had to, and then other things pulled me away from being able to stop it.

joseph added this: After re-reviewing the logs, and being in the round myself that time, it seems to me that you didn’t reach out to your master and, in fact, put him in danger. I’m not saying you did it because you were griefing or something. It’s more just a warning to be more careful next time.

My response: That was me being a bit cheeky, he didn’t put a law that said he had to survive. he just said kill at all costs, he was in the room with one of the people I had to kill (which I didn’t know by the way but, I didn’t make much of an attempt to stop him from dying so that’s fair) and I was told to kill them at all costs.

I told you in the ticket to make a staff report. This is not that. Look at the template again and you’ll see the proper link to staff report. Though you’ll probably miss it twice so I’ll just post it here. 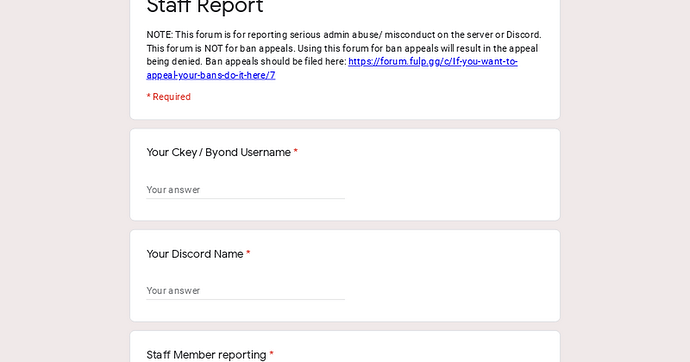