Active hours: Right now, any time of the day, but that will probably change to just the afternoon in about a month or so. I don’t normally play on the weekends.

Are you interested in becoming a mod?: Yes. If this application is accepted, I intend to become Junior Mod in about a month.

How long have you played on Fulpstation? I started playing towards the end of November last year, but I only played a few rounds at the time. I started actively playing March of this year. 310.7 Hours Total. 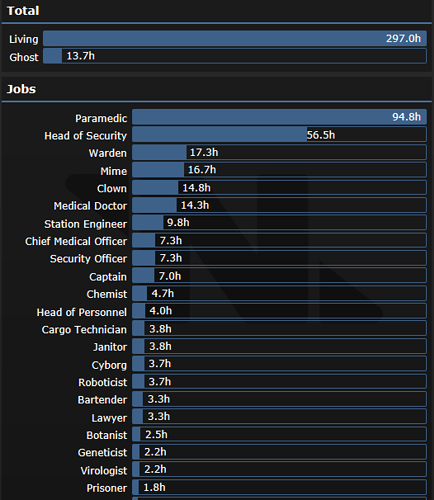 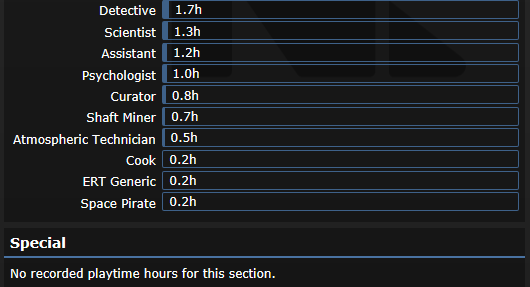 Medical - I have a lot of experience with med bay. From what I remember, Medical Doctor was the first job I played, and was the job I went back to when I came back in March. After that, I took an interest in becoming a paramedic (I very rarely play antags, so I can assure you that’s not the reason why). One of the best things that’s come out of this is the knowledge of map layouts and how to perform surgery. Sometimes, medbay get overloaded with patients with very few doctors (This actually happens a lot). As a result, I’ve also learned how to perform many types of surgeries, and what tools I’ll need for the job. I also know the situations which call for snatching MOD suits, and when you should just leave them to the side. I have a little bit of chemistry experience, enough to make a basic synthflesh factory, but I still think I need a bit more work on that. I know the basics of disease making as Viro, but find it rather boring which explains the lack of time. I have some time as CMO, but I’ve stopped playing the job so I can continue getting better at other medical jobs.

Security - Sec wasn’t something that I played until I got a good hand on playing other jobs (look at clown and mime) so I could get the gist of space law before going into it. After which, I wanted it to be my goal to ensure that no one is treated unfairly (too much time on the cell, making sure officers are justified in their arrests, etc.). As a result, warden was the job that engaged me the most. Every once in a while, I play security officer to refresh my abilities as a sec officer, but now I mostly play HOS, because I feel like it’s one of the most demanding and difficult jobs in the game (which also makes it a lot of fun to me). My time as HOS involves in ordering officers to get back to their departments, calling detectives to scan prints, telling wardens who to set to arrest (and look at body cams), naming known threats on the station, opening armory when situations like blob and operatives arrive, hunting down suspects along with my team, making sure wardens are taking care of the prisoners (brig and perma), and so much more! My skill as an HOS is something that I don’t think I can judge very well myself, as a lot of it depends on how I’m feeling that day, and the threats I have to deal with. Days as security team can be extremely random, but that’s what I love about it - how it differs from round to round.

Engineering - Engie is about all I have for this, and I don’t even have that much experience as that, haha. I mean, I know how to set up solars, repair damage quickly, etc., but I don’t have much experience with SM, and have almost zero atmos experience.

Science - I know how to do genetics, but it’s a very similar situation to Viro, where I know it but it’s just pretty boring to me. I’ve played scientist once, and I blew up some bombs (safely) in ordnance with the help of someone else. Roboticist is something that I’d love to get more experience with, but I feel like it just becomes boring the more of them that are on the station.

Supply - Cargo tech is pretty simple. I don’t think that there’s too much I need to explain here. Shaft Miner is a job I’ve played once, and just never got the feel for it.

Service - Yes, I used to main Mime and Clown. Thankfully, those days are behind me, but playing mime and clown has helped me get a better understanding of not only space law, but also the rules of Fulpstation. I’ve done a few botanist runs, but never got quite into it. I’m not a fan of playing cook/chef. Curator is something that I played once, didn’t understand it at the time, and never went back to it. Psycho and assistant… uh. I’ve had some pretty cool bartender rounds, but I feel like a lot of it boils down to just sitting there most of the time, especially when you have no robots to serve. HOP is alright, and I know how to change people’s jobs and access, as well as their PDA. I’ve never played chaplain, and used to play a bit of lawyer until I got bored.

Silicon - Most of the time I just pick borg to just hang around and not have too much to worry about (I know it’s ironic because you have to follow laws). I mostly pick either janiborg or mediborg. I also like to play PAI (if that fits under this category).

Captain - I play cap every once in awhile. Most of my rounds as cap involve me checking up on different departments, announcing important info over the newscaster, helping security (but not hunting down antags), and managing HOP line when there’s no HOP.

What are some things you’ve noticed as a player on Fulp?
I’ve never really played on other servers much, but I’ve watched a lot of videos on different servers. One thing I’ve noticed about this server compared to the others is how professional and mature it is. I think the non 18+ rating on this server really helps make people feel more at home.

I think another reason why it’s great is how beginner friendly it is. My first few rounds playing on this server, everyone was so nice and willing to help me become better at the game and help me learn. What I want to do as a mentor, is inflict those same feelings on to other players. I feel like I don’t get enough chances in game or on the discord server to help other people, so the ability to help people who are actively seeking it would help out a lot.

Lastly, I figured out that this server is strict, but is never toxic towards people who break the rules. When playing other games, I frequently see staff members being really toxic to the people they have to deal with, which I don’t think is a very good way to handle the situation. Most of the time, staff members being toxic to someone who broke the rules only makes them more angry and makes them want to break the rules on other servers/games. I’ve read up on a few of the ban appeals, and the people on this server never treat others the way I’ve seen it in other games. They simply just tell them what they did, and move on.

One thing I would like to see a change in though, is people’s willingness to do their job. For example, the paramedic. Choosing paramedic allows you to give other people a second chance in the round. No matter how far away the person is, no matter how many times you tell them to put suit sensors on and they refuse and wind up dead, I think it should be in every paramedic’s interest to try their hardest to search through maints, open lockers and crates, ask people when they last saw them, etc. However, I very rarely see other people doing this. Yes, every once in a while I see another guy bringing back bodies, but most people just stick around med bay or bar with their unlimited access, and I don’t think that’s what paramedic’s about.

I don’t know how much of a difference I would be able to make in changing people’s mindsets just by becoming a mentor, but completing jobs as quickly and efficiently as possible is something that I love doing, and as mentioned earlier, is something that I want to pass on to other players. It always warms my heart to see a paramedic desperately trying to heal a prisoner in crit, or a security officer avenging his dead teammates by beating down an operative.

I’d like to thank the moderators and admins for reading through all of this, and I hope you welcome me to the mentor team!

This was quite a long mentor application to be blunt. From a moderator view it seems that in the beginning you had a tough time adapting to our rules, but I am very happy to see that you have gotten over these troubles. I regularly see you help new players in game, and regularly report rule breaking behavior to us. I am also happy to see that you have quite a bit of discord integration with our community.
Overall this is a solid +2 from me
-1 Paramed main smh

No, but seriously, from what I saw of you in-game you seem to really know your stuff and you also show a dedication to do your job well.

+1 Medbay main. Active on discord. No issues that I can ever recall from seeing you or interacting with you in game. A mentor app that actually wants to be a mod? Whaaat

I remember back when you were fairly new to fulp and was struggling a bit with our rules and had a few chats from our staff. But looking now, you’ve become an upstanding member of our community and is active and kind in the Discord

I don’t really know you tbh, but seems active on discord so +1

I remember you being a little cringe, but recently (before you made this even) I noticed that you’ve been playing a lot better and thats very cool and good. +1

Your app is accepted! Welcome to the mentor team!