Are you interested in becoming a mod?: honestly no, I just want to teach people. 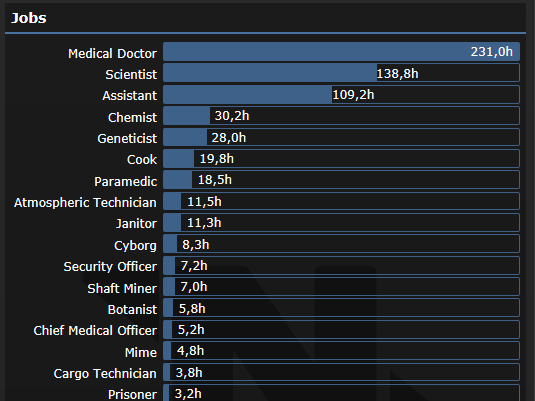 What departments are you able to be a mentor for? Can you elaborate on your experience in those departments?:

Sec: I’ve played a decent bit of Brig Phys, I know the layout, how to treat and how to not treat permas, but overall I’m not that good at it, mainly because of my innate unrobustness.

Medical: Oh god. This place. This department follows me even in my dreams, I hate it, despise it with every gram of my being, but I keep coming back to it like a goddamn lost puppy. The amount of hours I sank into this god forsaken place scares me. All of that aside i am pretty confident with my abilities in med, I know one (or even more) of treating any health condition, be that lack of organs, type of damage, wound, etc… I know how medbots work, I know what each surgery does, most of them I now know by heart; same goes for chemistry and it’s recipes. I’ve done plumbing setups that produced Synthflesh, Pentetic acid, atropine, epinephrine and mannitol all at once. I know how virology works, how to cure diseases and make vaccines. Honestly it’s easier to ask what I don’t know about med.
I am mainly applying for mentor to teach this exact department.

Engineering: this is the department I’ve been learning about recently, but I’m still pretty new. I know how to fix breaches, fix walls, machines and computers, access air alarms.
Also know how to set up solars, distro, and do basic gas mixing in atmos (Freon, H2); but I’m still completely lost when it comes to fusion, turbine, SM.

Science: my second most played department, I’d say I’m good at xenobio, but not nanites. Also I know how genetics work, but let’s be honest, who doesn’t.

Service: mainly played Chef and Janitor in this one. Not much to say, I know how to cook stuff, how to clean stuff.

What are some things you’ve noticed as a player on Fulp?:
Fulp got a huge influx of players over the past year or so, and while that’s an overall good thing, that also means that fulpstaff is under more stress than ever, and since Our staff is composed entirely of volunteers who work to make Fulp a welcoming community to all players, I think I would be a decent enough pick for a mentor role.

Always nice seeing them working in medical, definitely a +1.

+1, I’d make you a mentor right now if any of the other admins were online.

It’s vela, what else.

+1 great doctor to have around medbay

A great player and is very trustworthy. +2

The best boy.
+whatever number is a good meme

I’m Likteer and I approve this application +1

+1 you’ve been here forever and a day

+1 for one of the nice discord regulars

Accepted! Welcome to the mentor team!