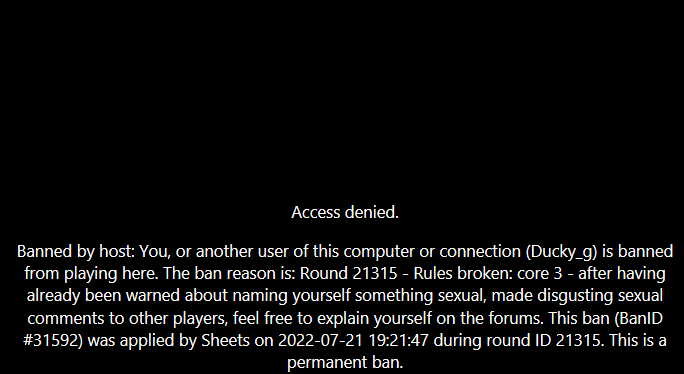 State your appeal: I was playing geneticist with my friend in discord as security and we were playing around with mutations and i gave myself telepathy and such and to test it i wrote a funny message to him along the lines of “i will fuck your ass” not thinking much of it because it was in telepathy and i thought it was funny. I dont really understand this ban as it was in telepathy to my friend who was on call with me but i understand because of the comment i made and admins dont know that. regardless i dont understand the perm ban for this just because i named myself something sexual in the past and quickly changed it.(quin foreskineaous) aswell this is the first server ive learned ss13 on and i got lot more of my friends to play on this server so being perm banned on this server sucks since the people im friends with play here. n i learned every job and mechanic here.

Last thing i dont get “Made disgusting sexual comments to other players”, like i guess it was disgusting but obviously a joke? and it was to one player that being my friend via telepathy. just dont get the wording.

Cool, glad you understand your ban. This is denied.

being my friend via telepathy

Actually, I take that back. Who is your friend so I can get in contact with them and confirm that it was a joke?