Appeal for Ban: Breaking of rules 2, 8, and 10 by Marshturtle 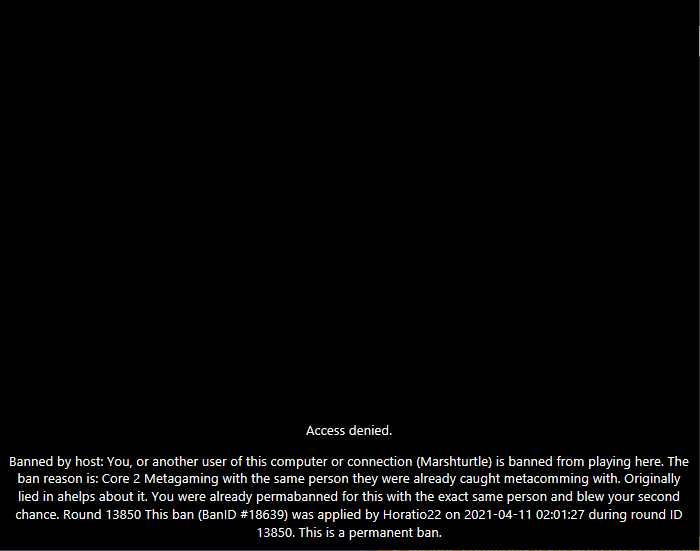 State your appeal: Metacommed and lied about it Around 5 months ago I posted this incredibly stupid appeal Appeal for Ban: Metacomming by Marshturtle. Essentially, I had just said “Pls unban,” and never took in the full weight of my offenses. I had broken rule 2 several times with self antagging (e.x. I put a voice activated igniter inside of a man, this was my weeklong one,) along with notes of rule 8 violations and rule 10 (which got me banned.) Guillaume is entirely right to call my last appeal “…legit one of the poorest appeals I had to deal with.” Of course, I had thought metacomming wasn’t a permabannable offense (which I see the TOTAL weight of it now.) When I originally made the appeal, I was frustrated and, through my rage, I went onto the fulpstation discord and complained about how admins were power hungry assholes and that they were misrepresenting my point. Naturally, I got made fun of and ridiculed by almost everyone. I ended up talking to Horatio in the admin channel (haven’t been on the discord in a while so I forget the exact name of the channel,) they said I could possibly appeal in 6 months (to the best of my memory.)

Since then I’ve been playing on Beestation (which I later got banned on for metacomming.) Realizing I was on my last leg, I wanted to make sure I took EXTRA precaution while playing SS13, and my last server would be TG station. After a decent amount of offenses (not involving metacomming, rather what would be your rule 2 and a bit of IC info in the OOC specific chat,) I got on essentially my last toe with a 3 day ban for self antagging vs a security officer. This was 2 months ago, I haven’t had a negative admin remark since, and I have This has been my SS13 story up to now.

Finishing this appeal off, I want to make sure this gets revised to the best of my ability. I wanted to make sure that I am fully versed in the rules and represent the situation to the best of my memory (let me know if I miss anything.) I’d also like if Horatio22 would be able to appeal this themself. With that last note, I’d like to conclude by saying a long overdue sorry, these admins are just volunteers and have to deal with indent brains like me daily.

P.S. I’d also be willing to take any jobbans that might be necessary.

I appreciate you being forthcoming on your previous bans. It looks like you have a better understanding of the rules now, and I trust that you understand that any further rule breaking behavior will result in you being put back on perma. I’m accepting this appeal, but I’ve also put a watchlist on your account so other mods know to re-perma if you aren’t following the rules. You should be able to connect to the server. If not, please let me (or another admin) know.