Note: This was like a week ago so I don’t remember everything but I got banned only now.
Character name: Madeline Jardine
Discord name: Rolz#3761
Round ID of ban: 9287
Ban Message: https://imgur.com/YOJqOtd
State your appeal:
First, I want to point out how safe portals created by a hand-tele are, even in the escape shuttle. 1 it’s like a 50% chance to be in space from the shuttle bridge, 2 you have to be pushed into it to teleport unwillingly, and if you do teleport you can just click the portal to go back. And I do not remember anyone dying, they got scared for their life and got out of bridge most of the time which was exactly what I was trying to achieve. I tried to teleport people out of the bridge instead of hurting them.
And If I was actually warned I would have stopped, no I wasn’t warned as stated in the ban message.
Of course I could have just let the people hang around and just get back to the station and hide but I don’t want to let random assistants get into the shuttle bridge just because its round end, they always try to do that and this method mostly worked, I don’t understand the reasoning behind this ban if I did not do anything serious, just trying to get people to get out of bridge by creating RNG portals.

Denied you’ve been warned a ton in the past 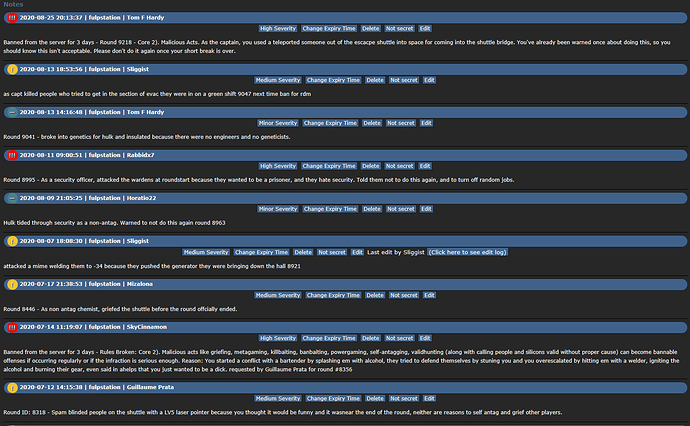