Round ID of Note: 8356
Note Message: Banned from the server for 3 days - Rules Broken: Core 2). Malicious acts like griefing, metagaming, killbaiting, banbaiting, powergaming, self-antagging, validhunting (along with calling people and silicons valid without proper cause) can become bannable offenses if occurring regularly or if the infraction is serious enough. Reason: You started a conflict with a bartender by splashing em with alcohol, they tried to defend themselves by stuning you and you overescalated by hitting em with a welder, igniting the alcohol and burning their gear, even said in ahelps that you just wanted to be a dick. requested by Guillaume Prata for round #8356
State your appeal:
My ban appeal was never reviewed, and I think this note should change based on
whether my ban appeal will be accepted or denied, even if this was a long time ago. This was before
the forums were used and my ban appeal is on the ban appeals channel in fulp discord.

Round ID of Note: 8921
Note Message: attacked a mime welding them to -34 because they pushed the generator they were bringing down the hall 8921
State your appeal:
I was a regular engineer and I planned on building something in space and powering the place with
this plasma generator, I got all supplies I needed and also the generator and I went to HOP line to
ask for eva access to be able to survive in space while I am building, when I am in the HOP line the
mime grabs me generator and just runs away, I stop the mime and take back my generator asking it
to stop. The mime does this several more times until I attack it once as a warning, but even then the
mime keeps going until I am done and I attack it repeatedly, the mime was standing still and not
resisting and I got a message from an admin as soon as I started attacking which means the mime
was probably ban baiting.

Round ID of Note: 8995
Note Message: Round 8995 - As a security officer, attacked the wardens at roundstart because they wanted to be a prisoner, and they hate security. Told them not to do this again, and to turn off random jobs.
State your appeal:
I became an officer and wanted to be a prisoner, so I wanted the wardens to arrest me, they wouldnt
arrest me for no reason so I trespassed into armory to give them a reason, I wanted them to just
walk in and cuff me but warden 1 comes running after me with a stun baton so I shoot him with a
disabler, but then warden 2 starts shooting at me with a shotgun and thats where the real fight
starts.

Round ID of Note: 9041
Note Message: Round 9041 - broke into genetics for hulk and insulated because there were no engineers and no geneticists.
State your appeal:
I know this doesn’t change much but there were really no geneticists around and a scientist helped
me break in because they also needed access, the place was abandoned.

Round ID of Note: 9047
Note Message: as capt killed people who tried to get in the section of evac they were in on a green shift 9047 next time ban for rdm
State your appeal:
How can you give me an inaccurate note when you saw it happening and we talked about it?
Note Correction: as capt shot people with a laser until they stopped who tried to BREAK INto a room
on the evac shuttle that wasnt bothering anyone. after said capt warned them about it several times
before shooting.

Round ID of Note: 9218
Note Message: Banned from the server for 3 days - Round 9218 - Core 2). Malicious Acts. As the captain, you used a teleported someone out of the escacpe shuttle into space for coming into the shuttle bridge. You’ve already been warned once about doing this, so you should know this isn’t acceptable. Please don’t do it again once your short break is over.
State your appeal:
Ban Appeal - MrTecoo
Again, read my ban appeal, my ban was denied because of previous warnings about griefing when if
you read the ban appeal I did not try to ruin innocent players games at all.

What a coincidence that the person who left most inaccurate notes that make me look worse and denied my ban appeal for said notes, locked the post so I can’t respond, and ignored me on discord when I tried to respond there, Sliggist, was the one I staff reported earlier for being biased.

Your appeal was denied because prior notes about you kicking people out of the bridge section at evac in lethal ways when you use a hand tele and it spaces or gets someone killed because the location they’re put in that’s on you because its the captains job to use it responsibly and because you lead them to their death. Same situation is if you threw someone in a garbage bin and they end up coming out in a breached part of the station or went though an emaged grinder they were lead to their death. Also this is seven different appeals/ request for note on one appeal generally we don’t change notes unless there is a special circumstance. Six different events were all reported within one month all of them being violent. Alright and last thing is if you make a staff report make sure you’re using the new staff report system.

Why would you not change a note if it misinforms other staff members about previous actions, and you responded to another note appeal and changed that note just fine. Note appeal - stella
At least some of my notes are just the same case as in that note appeal, misinformation.

Changing the word “shocked” to “stunned” is very different then changing seven notes of all the same type of behavior. Especially when six different staff members are all involved and give the same consistent stories that match the logs.

This is your complete note history. 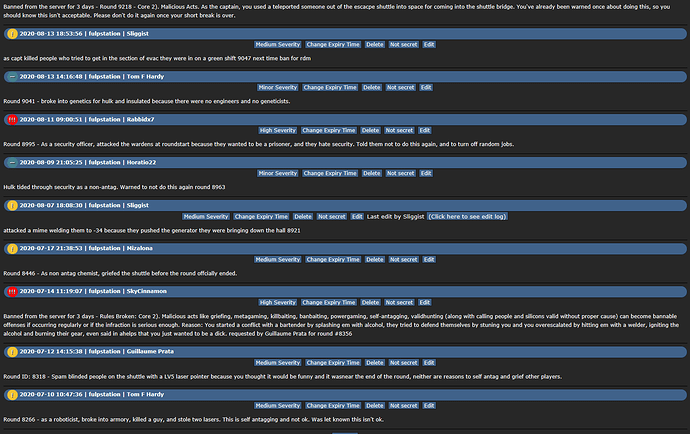