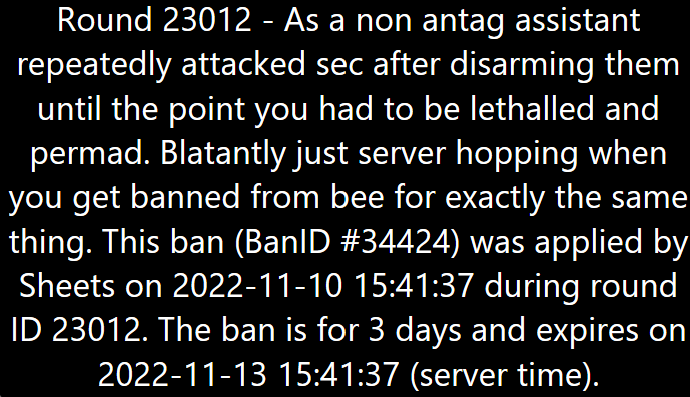 State your appeal: What happened here is not at all what the ban reason says so first let me clear that up, at the start of the shift me and the clown were slipping each other and messing around when the hos came by and I pushed the clown into him knocking them both down, then when he got back up he got upset and tried to baton me so i slipped him and took his baton, after getting up from being slipped he simply said “set to arrest” and walked away, i though it was wierd but didnt think to much after that, on my way up to sec to return the baton two officers started chasing me no questions asked so i ran to try and lose them to not be arrested for something kinda silly as this, they got me after a bit of running around and took me to prison where I was left buckel cuffed in a cell [against space law btw] after asking for a lawyer to sue due to being left cuffed to the bed after about 7 mins passed of my 12 mins brig sentence for assault and theft the warden came in to uncuff me when i ran out of the cell and was stunned beaten lethaly and throw into the isolation cell injured, i pda messaged the ai for assistance because they threw me in with everything on me and he let me out where i tried to get to med when i was stunned again and lethaly shot at and harm batoned while in handcuffs and already injured where i was put into crit while cuffed. The admins ban reason dosnt make any sense in the slightest due to the fact im not banned from bee station and took about a 2 year break from the game just recentally Coming back to it to find out the security is still horrible as always blatently not following any laws/rules, iv also have only played on fulpstation ever since coming back to the game so his claims of me “server hopping” are blatently untrue. I’d also like to say the admin banned me with little discussion at all when i only have like one note on this server and its not even true to begin with. Im just a bit shocked how I was the one here to recieve punishment when sec who shoot people with lethals while in cuffs get away scott free. overall this seems like a lazy ban in my opinion the admin didnt really listen at all to what was going on probaly being pressured to do something because the warden ahelped because IC breaking the law dosnt exist if you are not an antag apperentally, she saw no tot gear on me so its an ahelp to see what the admin would say to determin if i was antag or not. But yea, just a bit upset here for how things went down being left in isolation for what started as pushing the clown into the hos and him getting mad at it leading up to me being lethaled in handcuffs while grabbed by the warden.
(Edit): i also want to add that me and the clown were harmlessly playing at escape having a slip battle when the hos wearing his full hardsuit for some reason decided to self insert himself into the situation and got upset when he was so mildly inconvenianced in the situation he put himself into, my intention was not to spend a chunk of the round in jail because someone who had department power cant handle getting pushed.

What happened here is not at all what the ban reason says so first let me clear that up, at the start of the shift me and the clown were slipping each other and messing around when the hos came by

At the start of the shift… uh, no. I’m pretty sure this was about 1h+ into the round or something. I’m hurt, just rezzed but not fully blue, and trying to get back to sec, iirc this was just after an infiltrator went and made a hole into sec and spacewind crit 3/4 of the sec in 2s. I’m trying to get to brig to deal with the infiltrator who’s in custody. I get slipped by the clown… twice, I think it was? And notice I do not have my weapon whenever I get up. (Unsure if you/the clown got it while I was down or I lost it earlier.)
I see you running away from the situation, so I try to baton you to see if you do have the gun on ya. You slip me and take my baton, fine, you obviously have no intention of getting it back, I’m not gonna deal with any of that. I set you to arrest and walk away, cause there’s frankly more important things to do.

I have frankly no idea what happened with you and the warden, cause I spent about the next ten-twenty minutes dealing with the fact that the sec had sentenced the infiltrator to 1k mining despite them murdering 3/4th of the sec + cap.

I think the next time I heard about you, my seccies told me that you got lethaled by the sec after trying to escape from your prison and getting recaptured THREE times, and I asked them to go and revive you.

you and me have very different views on what happened, literaly me and the clown were doing circles around each other at escape, neither of us were leaving the area as you had the time to say to me when slipped and disarmed “set to arrest” before walking away, i didnt see why you didnt instead decide to ask to search me or to ask if I had your guns I was fresh spawn so yea the round time might of been later, to me it looked like it was just starting because i saw no station damage or anything even in sec besides from the firelocks down in perma. basically you trying to baton me as a assistant who just got there 5 mins into the round and did nothing other than push a clown into you didnt sit well with me and felt like an abuse of power, sure you do have that power to baton anyone you want according to the server rules but that shouldent make you immune to IC consequences for doing that to anyone you feel like with little cause, and thats why i was banned, breaking out of jail multable times and DEFENDING not “attacking” as the banning admin claims myself when the goon squad came to arrest me, the only time i went on the offensive and acually picked up a disabler from an officer was when i was bolad and couldent move, and fired a couple shots off to try and free myself. I just think its dumb that a sec officer can just ask admin if someone breaking the law is allowed to break the law to basically reveal them if they are antag or get them banned if not making security completly broken and all IC issues non existant, break the law and be banned if not antag or break the law and be sent to perma if you arnt banned because your antag. in my opinion security should never ahelp someone who is breaking the law unless is blatent murderbone or serious sabatoge, when i play sec i handle things completly at the IC level with no admin intervention (yet at least) i just simply follow the space law easy as that, you want to see if someone has something of yours or someone elses, ask for a search, they refuse then try to arrest or set to arrest, what you did made absolutly no sense, you thought i had something of yours to you immediatly tried to arrest me with no words and I resisted obviously as anyone would then instead of trying to rearrest for resisting you just said naa i give up and set me to arrest for another officer who had no idea why I had a red w over my head to pull me into the brig and pop me in jail with no knowladge of what i did or why i needed to be put in jail but by god they love putting people in jail so they will do it anyway, it seems like most security “charges” are made when the officer tries to arrest you, because i literaly had no charges or reason to be arrested untill the officers tried to arrest me, then i got “theft” and “resisting” for slipping them and taking the baton, setting someone to arrest for little to no reason cant be something that can go completly unpunished not even by IC means or whats stopping me from just “random searching” anyone who dare comes within one tile of me and my harm baton as a sec officer other than a random mime who happened to see it go down close by and steps in to slip the officer for his actions, nope mime banned for slipping sec. Anyway this is the point im trying to get across, this was an IC issue that had no right for admin intervention due to securitys actions against me, and im not even mad about getting lethaled because id consider that IC intervention at that point, did theyNEED to use lethals against a snail speed cuffed crawling away person, no defenetly not but i didnt and wouldent of ahelped it because that was like my 3rd time busting out of jail in a span of like 10 mins so its understandable unlike the admin made it sould like it was NESSESARY saying i forced them to use lethals showing he obviously didnt look into this at all and just lazy banned, when these lethals were using i was in about orange hp moving next to crawling speeds down a narrow hallway while cuffed so yea its not like I was a mass station threat with half the armory in my pocket, i was an assistant without a bag even who just wanted to mind his own buissness and have a peacful shift.

(edit):i dont beleave in periods sorry for the run on. 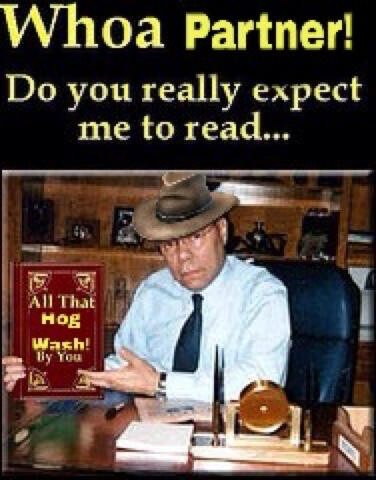 I pushed the clown into him knocking them both down, then when he got back up he got upset and tried to baton me so i slipped him and took his baton

So, slipping sec to steal their equipment. Right. That’s self-antag, and I’m gonna save myself a half hour of going through the rest of this to explain why whatever else you did was also against the rules because this is grounds enough for a ban. Please write a little more concisely this time. If you need more than a paragraph to explain what happened, you’re grasping at straws to justify poor behavior.

Also, for next time, try reading this (particularly tip one- don’t write a novella) 7 Tips for writing a good ban appeal