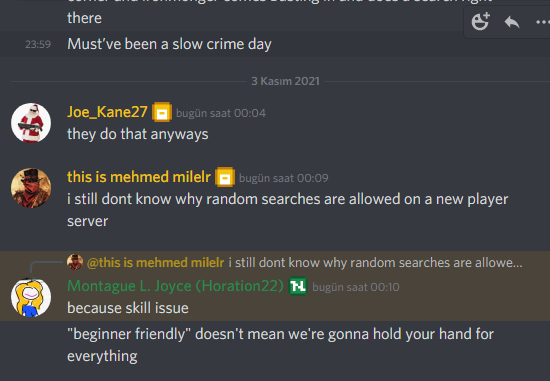 I dont know what was her issue but she comes in and starts shit talking me out of nowhere for this comment. Which starts here; Discord

After she made no points but to insult me, i went in as security to bag check randoms because this is security gameplay on a beginner friendly server and i wanted to prove my point. The first guy i random bagcheck replies with

which proved my point, i saw a perma out of perma and ask to check his bag even if he told me that captain released him, he insults me and leaves, other crewmembers helping him(again proves my point) now its either before or after asking that prisoners bag i get 2 traumas then i know she’s watching me, i make some comments like “this is my job, no fun allowed” to a miner that used a lavastaff on station and put railings around. Montague tries to smite me with a delimb one (i think? i started to spin but no delimb as im a skeleton). I go to medical to get my traumas fixed then jokingly said “everyone drop your bags” and sarcasticly chased pandan because he said " im bad you cant bagcheck me". I get gibbed, see her ghost on my body, get the first ahelp from her telling me to stop the petty shit and permabans me.

Me making remarks about her and her comments in game are wrong and i also apologize for joining and doing bag searches just to prove a point also a special and the most important apology to the players i random bagchecked. I never was mad or doing it out of spite because i really like new players, i want the best for the server, i was jsut trying to prove a point. She clearly overreacted and took this personal with couple of traumas, a smite and a straight permaban for this offence and without talking to me before is very absurd. I did not “rule skirt” and abuse any bagchecks to ruin someones round even though im allowed to do this(?) and everyone should cope while i do that? I bagchecked 2 random people only. A real childish and an unprofessional act.

This grudge has been going on for 2 years now, i was suspicious of it first but this confirmed it. I tried to get along but it isnt working. Im also down for a civilized and an adult conversation if that is possible.

For the record, I didn’t traumatize you. I gibbed/ banned you when I got on, though. If you had checked the adminwho function, you’d have seen I wasn’t online until you were gibbed.

I’d also like to point out that this toxicity isn’t anything new and is why you were removed from mentor in the first place.

Also worth noting that if your issue is with me (or another staff member), that doesn’t justify specifically targeting new players to “make a point”. Security is expected to enforce space law “within reason” and abusing crew to get back at staff isn’t in line with the spirit or the letter of the rules. 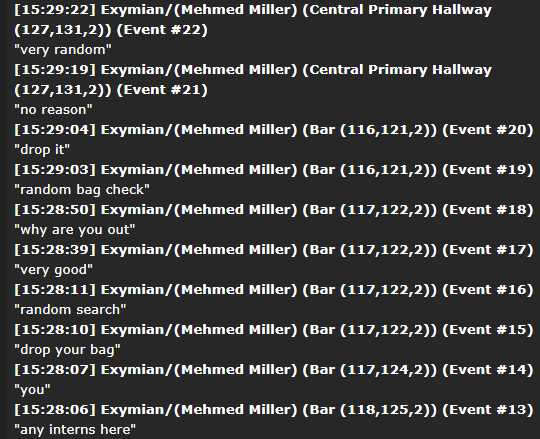 The entire reason you were banned is because you specifically targeted new players to search. As Joyce states, we don’t hold the hands of new players, but we’re also not going to let someone specifically target them. People have been banned for doing so in the past as well. Also, here are the logs showing that Joyce didn’t smite you more than the gib, as she said. This was the only smite used that round and she joined almost immediately before it as well, because another member of staff asked her opinion on the situation. It is common practice to round-remove smite someone who is permabanned, either before or directly after the ban.

Also, I’m really not sure where you got the idea that Joyce is grudging you, considering only a single note of yours is from her, and it’s for hatespeech. That’s cut and dry enough that there’s no way someone would be able to stretch it just to grudge you. In an actual metagrudging situation, I’d expect to see at least a few other notes from the supposedly-grudging staff member.

I can’t stand old players who come back just to cause issues. Especially so when they treat Fulp and its players (particularly new ones) like their playground to do whatever they want. I don’t have any sympathy when they come back and get banned for it. If you actually do want to play on Fulp, you can appeal in a month and we’ll consider it then.