The Appealing: The Third Arrival

Ban Message (Gyazo/imgur or copy and paste): Ban upped to a perma on round 21453 because of this appeal AssBlastoMan's next appeal
State your appeal:

Continuing the discussion from AssBlastoMan's next appeal:

First I get a ban over a harmless ahelp, now I’m being permabanned over appealing a ban? How is this reasonable? If I knew I would’ve been permabanned I would’nt have said anything. I’ve played on this server for a while, of course I have notes. Again, like I’ve said multiple times, most of my play time is as sec, and I have basically no notes regarding my sec play. I’ve even asked an admin about my note history cuz I feel like whenever I DON’T play sec I get in trouble somehow, and I felt like it was just racking up until I got an inevitable permaban. The admin himself told me it wasn’t nearly as bad as a lot of other players and not to worry about it. I don’t remember who it was but it was maybe a month or two ago, so if they see this and care and didn’t change their mind after 2 bad instances they can chime in. The vast majority of my notes are just dumb mistakes, most of them didn’t even result in a ban, and IIRC I don’t get bwoinked for the same thing twice, so I at least learn from my mistakes.

I’m not actively malicious in any of my notes, most of the ones including violence I was an antag. I was weaponizing bees as an antag, no one said anything about it to me and I’m sure there were admins on at the time, but if it’s an issue I can stop that too. Most of them just sat in cargo so I don’t even know why bring it up. Some of these notes are literally 2 years old.

My ban prior to this one wasn’t even related to my IC play and was over an ahelp, and it was an extremely minor infraction. I can change my ckey, I’ve never even been spoken to about it, and I don’t display it in dchat or talk much in OOC anyway. I didn’t know it was against the rules or close to be considering “Ass Blast USA” was a common spam from AIs on many servers and I’m sure I’ve heard it here. If the monkeys caused a lag spike, I’m sorry, I didn’t notice or know, and if the banning admin had told me I would’ve been more profuse in my apology. My intention wasn’t to lag or sabotage the server and the thought never even crossed my mind that what I was doing would cause that much trouble.

I don’t go out of my way to ruin rounds for people, which is why I noted in my original appeal that afaik no one was killed or round removed. I understand that I went too far with spamming the monkeys, but now I’m being punished with a perma ban just for appealing this? What about my notes warrants a perma ban? It’s easy to frame me as some irredeemable shitter at a quick glance, but the reality is 99% of the time I’m not being bwoinked, I’m following the rules to the best of my knowledge, and afaik I’m not a giant dickhead in OOC, or ahelps, and I don’t really think I’m shitsec most of the time and I’ve never really been bwoinked for it. I play sec and drag people to brig while they scream and swear at me, literally for like 150+ hours, and basically without issue the whole time.

I have 7 notes over the last ~100+ living played time, 2 of them were from my own ahelps, 2 were antag misunderstandings, 1 is about proper *me use. How is this perma worthy? You mention my attitude but I’ve made an effort to improve since I started playing on Fulp mainly and I even have some notes that mention me being understanding in ahelps, so I’m not some unreasonable asshole. I’m being permabanned for appealing a week ban on a job I’ve hardly ever played? I don’t understand this escalation at all, and from my perspective I just feel like I’m being punished for appealing.

Again what have I done that’s so bad? My ban message says I’m being permabanned over the appeal. What did I say that was so awful?

AND AGAIN, a ban with minimal discussion. At least when the other admin wordlessly banned me he didn’t tell me to wait six months to appeal a ban that was arbitrarily increased from 7 days to permanent. This is ridiculous, hardly a step above a post that just tells me to go fuck myself.

Here is the reason this was upped to a perma

image927×407 89.6 KB
Hope that helps! We dont discuss any appeals there is not a single appeal up that is a discussion. Yours was denied ,it will be denied indefinitely if you want to keep trying to make more and more appeals. You have been banned from fulp alone 8 times. I even posted the link to show all your bans. Lets take a look whats the same theme we see over and over
https://centcom.melonmesa.com/viewer/view/assblastoman 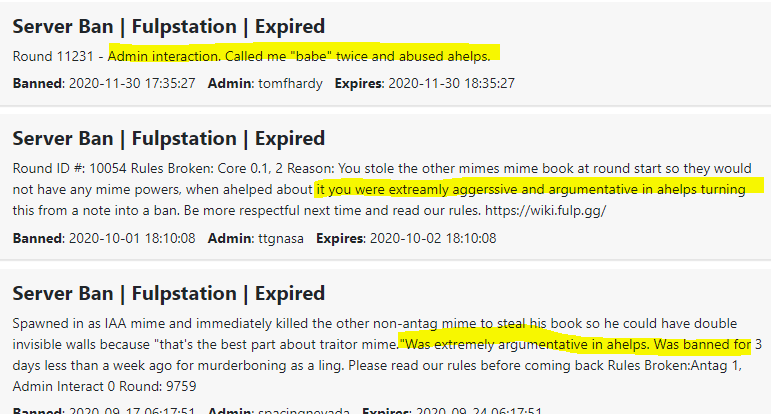 Every single one of these bans is from a different person. Including the perma i upped you to that is 8 different people have banned you for acting like an aggeresive asshole. If youre gonna sit there and say everyone is wrong but me youre nuts. This is never gonna get appealed especially if you want to keep spamming appeals.