Introduce yourself I guess

Hey guys I’ll start
I’m windarkata, head coder and former head admin of fulpstation.
I am a programmer IRL, mostly C# and SQL. Begrudgingly PHP.
I like playing janitor when I have time but it’s been ages.

Post a bit about yourself I guess who cares

Hey there, I’m Golden, currently a moderator and a contributor for Fulpstation.
I’m going to be a programmer IRL eventually, and I’ll be the one to bring some ride-able spaceships on Fulp eventually.
I like playing Mime and Curator, lately, but honestly there’s just a lot of jobs I enjoy playing, and many more that I simply haven’t tried out yet.

Oh hey guys. I am Papa OJ, more known as Horatio Mayland IC. I’m a long time ss13 player (since 2013), short time fulper (only about 2-3 months on this server). I’m a materials engineer IRL, but in game I like to do everything BUT engineering. Namely virology, cookin’ in the kitchen, paramedic, warden, sec officer, annndd atmos tech.

Its been a treat so far hanging out with ya’ll, please be patient as I am very unrobust, despite my hours sunk into this game. Here, have a swole clown. 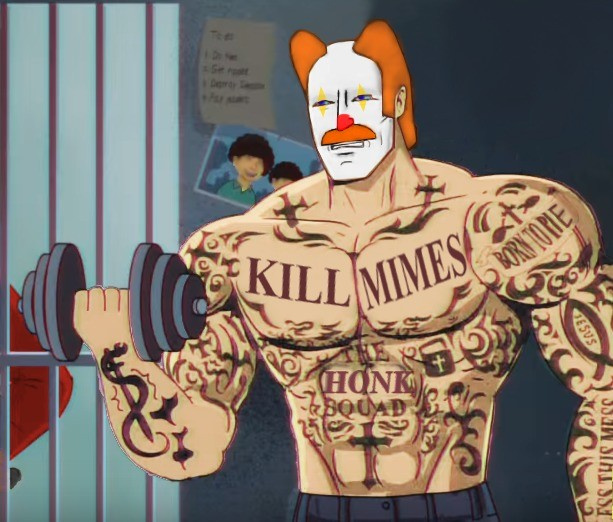 I’m John Willard on almost everything, and I am currently a mentor for Fulpstation, with nothing else to my name.

also
i love durands
like
really love them
oh my god

I’m shangeko also known as flepus the fly.
Oh my do i love making grenades and testing them out. i’m mostly a chemoost or a chaplain.
I love vomit…like… alot…

I’m Pyx! I enjoy finding ever-new ways to piss off and harrass my favorite spessmen friends. Mentor occasionally. My favorite role is comms agent. Theres nothing like Syndicate Radio to annoy the crew.

Hey it’s Xan. Dear god please help me I’m a moderator, SkyCinnamon held me at gunpoint to make my app and this post.

Please find me in robotics, xenobiology, or the AI core. Bring shoes because I get hungry.

moderators get the whip if they slack off

You can usually find me building bases deep in maintenance as an assistant, or doing things worthy of getting my medical license revoked as a doctor.

I am 00petar00 and go by the same beyond username.
You might’ve not noticed me in game as i use random name every round.
I have around 300 hours playtime on the server.
Roles you may find me at, scientist, security, QM,prisoner,some command roles and just now learning mining for the gamer loot.

I’m buzzardman2, I’m an admin on fulp. I’m still learning to code and have done a few PR’s for fulp and also play as a plasmaman. I also enjoy rping as a talking fuel tank and playing borg/ai. My IC name used to be argon XC but eventually there were like 5 argons so i swapped out my plasmeme name. As a borg i play as CABAL.

i could put you in a coffin if I wanted to

Hello there, my name is Noah Jones, also known as AstrOS 9.5. and, very rarely, Dominick Marrow.

If you ever find me, you will either see me as a Doctor (sometimes stressed due to the incompetence or the “rudeness” of the other doctors), Chemist (usually giving out lube to the clown or anyone requesting it) or probably as a chef or engineer.

I have the bad fame of being an antag roller, still working on that hehe

! I also have fame on being a decent cultist (although nobody’s perfect except Joey), and I always try to plan things before acting. Now I still wonder if cooperation still exists in fulp…

Anyway, I love bullying heads if they’re being kids, i like helping new crew on jobs i usually play (I’ve assisted a lot of new doctors and chemists) and I absolutely love bartending as both bartender and service borg, so long as the bar is crowded with nice people ;)

I have around 1.200 hours in Fulp but still a rookie on several fields, especially in engineering. I have basic knowledge of religion-related antagonists and team ones, but still need some training in combat and robusting. I recently liked playing Security rules (except HoS, that job stresses the shit out of me) since I usually like treating people with warrants and prisoners with respect, which usual sec officers forget to do.

And yes, I’m one of the few people that supports clowns as long as they don’t act like monkeys. Honk!

Hello i’m Scout I also go by Sol Opris but in Game and on Discord I’m Eva Walker.
I am a Jr Contributor Working on Maps as well as Very Slowly Learning Coding Online, but most people know me as a Player.

I like playing as Chaplain and Curator. But I am Most Robust at medical.

I am Jed. I play pretty much random departments but you can find me in atmos quite a bit.

Hi, I’m Mike in discord, zzzmike in byond, and usually Ned Newson or N.E.D. 9000 as characters. My interests include making byond/beyond puns, trying to fix the station as engineer, opening doors for you as AI, and trying to make people laugh in fulp discord.

If an admin wants to change my forum name to Mike that would be cool as I’m trying to lower the amount of names I have haha.

I’m Joyce. I’m an admin here. I do admin things. I really like France.