Intro:
Im really bad at keeping this shit simple so I did it all in dot points, this guide also doesn’t tell you anything about making trit, h2 or setting up the turbine just for power generation… If there’s anything you need help with, just come find me in game, I play a shit tonne of engi and atmos at the moment and im happy to help

When i originally wrote this guide, cans worked a lot differently, now you just need to put a power cell in them and enable the shielding and they wont explode from pressure as long as its charged

• Cans & pipes contain gasses, said gasses have an amount (mols), a temperature (K) and the can itself has a pressure, which is the space the gas takes up based on both the temperature and volume (mols) of gas inside. The higher the temperature, the higher the pressure, cans also have a maximum pressure they can hold before they can’t take anymore gas. An easy way to get more mols of gas in a can is to cool it with a freezer.
• As long as a can is wrenched to a manifold the gas inside it will not react, though the gas in the pipes will (you can use this to hold burn cans before they heat up)
• Pipes work sort of like cans, except they cannot burst and can be infinitely expanded by adding more pipes to a network, you can split pipes into multiple networks by using one way devices like mixers, filters, gates, pumps etc.

• Every pipe sits on a layer, to change which layer a pipe sits on, you use a layer manifold, using layers, we can stack multiple pipes travelling in the same direction on a tile without mixing the gas inside

• Volume and gas pumps are both straight, one way pipes (they don’t allow gas to go back through so if you have a freezer before it, the gas on the other side wont be directly cooled). Volume pumps transfer gasses by mols (I think) and gas pumps, by pressure, therefore, volume pumps will be more efficient when dealing with larger quantities of gas and gas pumps will be more efficient with lower quantities.
• Injectors and vents work similar, however they are used to alter the atmosphere around them, not transfer gas between pipes

• Heat transfer pipes average the temperature of the gas inside them and the gas in the atmosphere around them, they are linked to normal pipes/pumps with a junction, these are used to cool the sm by default and can also be used to make ovens or whatever… get creative!
• Also the heat transfer pipes at the bottom of the heat transfer tab are used to average the temperature of the gasses in both the pipes, letting you have a coolant loop separate to the gas you are cooling 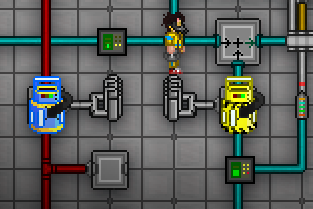 Gas mixers
• They mix the gas going into the two input notes, node 1 is the one directly opposite the output and node 2 is the one that isn’t node 1 (:

• Gas goes in, the thing you set to filter comes out the side, and the rest keeps going straight

• Every area should have air alarms that are used to control the operating modes, scrubbers and vents 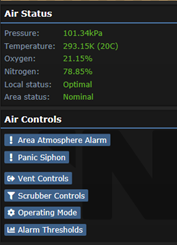 The categories should be pretty self-explanatory, with the panic siphon just setting all the scrubbers to siphon on expanded while turning off the vents, removing all gas from a room.

• Scrubbers take specific gasses out of the air, determined by the area’s air alarm, and pipe them back to Atmos in the red pipeline. By default they should just scrub co2 so if there is a gas leak, either set the operating mode to contaminated or go into the scrubber settings and manually enable the specific gas.

• Vents fill a room with the gas in the pipes connected to them, by default they are connected to the light blue pipeline, filled with air (o2 and n2). If a room doesn’t have enough pressure/air (likely caused by a breach) you can increase the vents output pressure to fill the room, however the fastest way I find, to fill a room is by dragging an air can (white) and opening it at the default pressure to stabilise the atmos.

• The waste loop is fed by the red pipe, connecting all the scrubbers around the station. It then sorts the gasses into their respective storages using gas filters, injectors and vents. You can manually change the settings on the gas filters but the injector and vent inside the storage is controlled using the console outside. 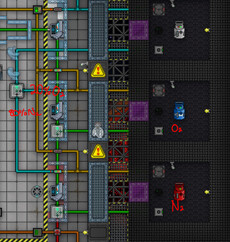 Freezers/Heaters:
• Freezers and heaters are machines used for, you guessed it, cooling and heating gasses. To make one, you need to make a machine frame, add the board, then 2 bins and lasers, some wire and a sheet of glass.

When you print a “freezer/heater” board at the circuit imprinter, it has a random chance of being either a freezer or heater board, if you wanna change between the two, use a screwdriver on the board.
^ This was removed, now you can just set it to heat or cool without messing around with rebuilding it

• When you first build a freezer or heater it should by default, be on layer 3 (the middle one) and facing down, to change the direction of the intake, unscrew the freezer so the panel at the top is open, then wrench it to rotate it. If you want to change the layer the freezer is on, screw it open and use a multitool instead.

This is the machine you should use to make any kind of crystals (very cool, hypernobilium crystal is the best) the red intake is the heat intake, you can just slap a burn can on this for most hot reactions. The green is the gas intake, be careful this doesnt clog as you might need to add more pipes or pump the gas out to get the right ratio (this almost never happens)

Its pretty self explanatory, just mess around with it theres no real risk tbh

• A burn can is pretty much a plasma fire in a can, its typically used on heat exchanges for heating gasses to trigger reactions. If done correctly, it usually reaches temps of ~40000K with about 8000mols of gas

• After you set this up, set up a manifold after it, leading to a freezer and a connector. Turn the freezer on, wrench a t2 can and wait for the can to fill with at least 8000mols of gas.

This mix, specifically, is bad because I still had some excess gasses from earlier, but it wasn’t bad enough to ruin the result so I did it anyways. Always try to keep your mixes clean, without other gasses, especially bz in this case, as it will mix into freon, which will react with the o2, cooling the can a tiny bit and lowering the temperature.

• Once you’ve set the can up like that, change the freezer to a heater and heat it up past 375K (the picture earlier was taken after this step, before unwrenching) once the can is hot enough you can unwrench it and watch the temp rise. 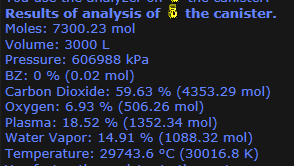 • IMPORTANT NOTE: gasses inside cans won’t react with each other while wrenched to a connector

Right, so you know the basics of gas and shit, now the next step is to actually mix gasses and sell them for shitloads of money, im just gonna give you an example of an easy gas to mix but everything that doesn’t need fusion is pretty much the same.

Freon is made from Bz/Co2 and plasma (bz and co2 are 1:1 ratio, I have no idea how much plasma you need so I just fill it with as much as possible) also, the ratio is going to change to be accurate with the tg wiki in the next update.

This guide is hella outdated so theres probably some random shit i forgot to update that doesnt exist ingame anymore, ill probably completely redo it if I feel like it (I wont) Good luck!

ill probably update this with turbine and h2 stuff when fulp updates because I think hydrogen is changing a lot and the extra layers will probably change my turbine setup.

10/10 was able to make a freon bathroom
Perhaps you can also teach the inhabitant’s of this station how to make Hot Ice?

Oh thank god, a quick and easy atmos guide. Thank you for posting!