Willard's Guide on being a Captain

I’ve seen as of recent, many Captains who have been playing the role solely for the access and gear. The problem for this is because people who want to genuinely play Captain to be a leader, is usually scared off by the “responsibilities” that come with it. I’m here to demonstrate how you can be a Captain, just to show off how easy it really is.

The crew is very likely to trust a Captain and HoP over a HoS or Security Officer, but this isnt always the case. In a perfect society, the Captain is the leader of the station, the HoP is the representation of the Crew, and neither are related to the Security department. You spawn with Sunglasses and not Sechuds. This is for a reason. If your inventory looks like this, you’re doing something wrong.

No one trusts a Lawyer with a stunbaton, so why would they trust a Captain with one. You are meant to be the arbiter, not an executioner. Sticking to your default kit is the best way to get the crew to trust you as as leader, rather than a “HoS with more access”.

Most department heads are a department head, to play as the head of that department. This sounds obvious, but many Captain’s forget this fact. Most QM’s wouldn’t like you to enter their department and start bossing people around, most Warden/HoS’ aren’t a fan of you opening the armory and declaring it open to all Security personnel, most RD’s wont like you researching Clown tech while they’re saving up for T4 parts. Give the departments their breathing space, you’re meant to listen to complaints about the heads of staff, not to be them. 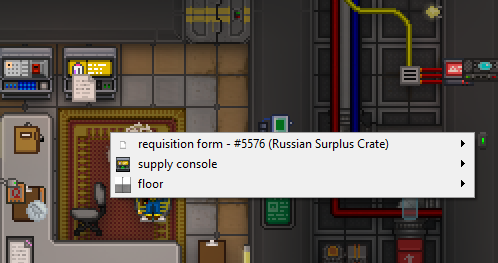 You’re a target for antagonists. Who’d of thunk? Changelings impersonate you, Traitors are after your gear, Heretics want your sacrifice points, Nukies are out for your disk, Revolutionaries are out for your head, and Cultists sometimes have to sacrifice you to their dark God. This is normal, you’re used to this! You have access to Security comms to ask for help if needed, and you get an Energy gun, a sabre which deals devastating blood wounds, and one of the best batons in the game: the Telescopic baton. On nukies, stay near as many crewmembers as possible, dont rush into fights. If there’s Cultists or Revolutionaries, you get an exemption to the “No SecHUDs” rule, so go grab a pair, as mindshields are important. I also have a guide on how to deal with Revs for every head of staff here. In general, you should leave Security to do their job, approve of their executions if caught and hostile, and keep your tools for Self-defense.

–
I’m missing a lot of information here, and I’m not proud of this guide, but I’ll be editing it overtime to make it as best as I possibly can.

As the captain can i give the clown AA?

As captain/hos I like to see humanoid antags as well, humans and lings as genetrash, people tend to like you a whole lot more if you try spare these humans when sec catches them by using perma or implants to make sure they don’t commit more crime, like removing a wizards tongue… lings however can rot in hell gib them all

I think that there is no problem with getting sechuds as cap as long as you don’t use them to run around like a sec officer. I think that the most obvious use is being able to see if officers around you are mindshielded. The captain is the head closest to security other than the HoS, the headset even starts with sec comms on by default, so it makes sense to me that the cap could have sechuds.

so it makes sense to me that the cap could have sechuds.

That would mean a Lawyer and HoP should get sechuds, too. If the Captain was meant to have sechuds, they would get one roundstart, like all Security personnel. Same for Medical huds and Medical personnel.

dont forget, if you needa shut down a department fast, the ce’s computers can remotely disable any APC

Some lawyers do ask for sechuds and sometimes get them depending on how many are around and if the warden/HoS are feeling generous. It does help with prisoner processing.

Other than that, great guide! Read this during my first captain round!

I mean, there are situations where as Captain (or even other Heads) having security hud (even the regular huds) could be of use, like if there’s someone going around murdering people but never changes their ID, revs, cultists and such.